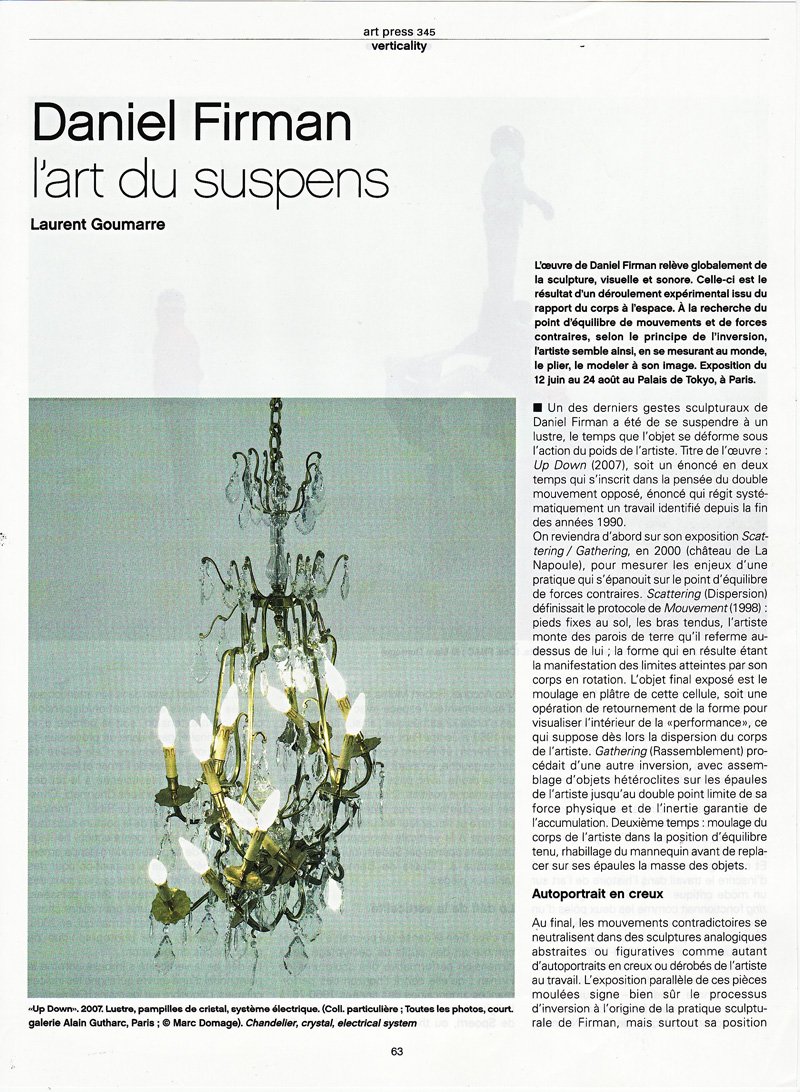 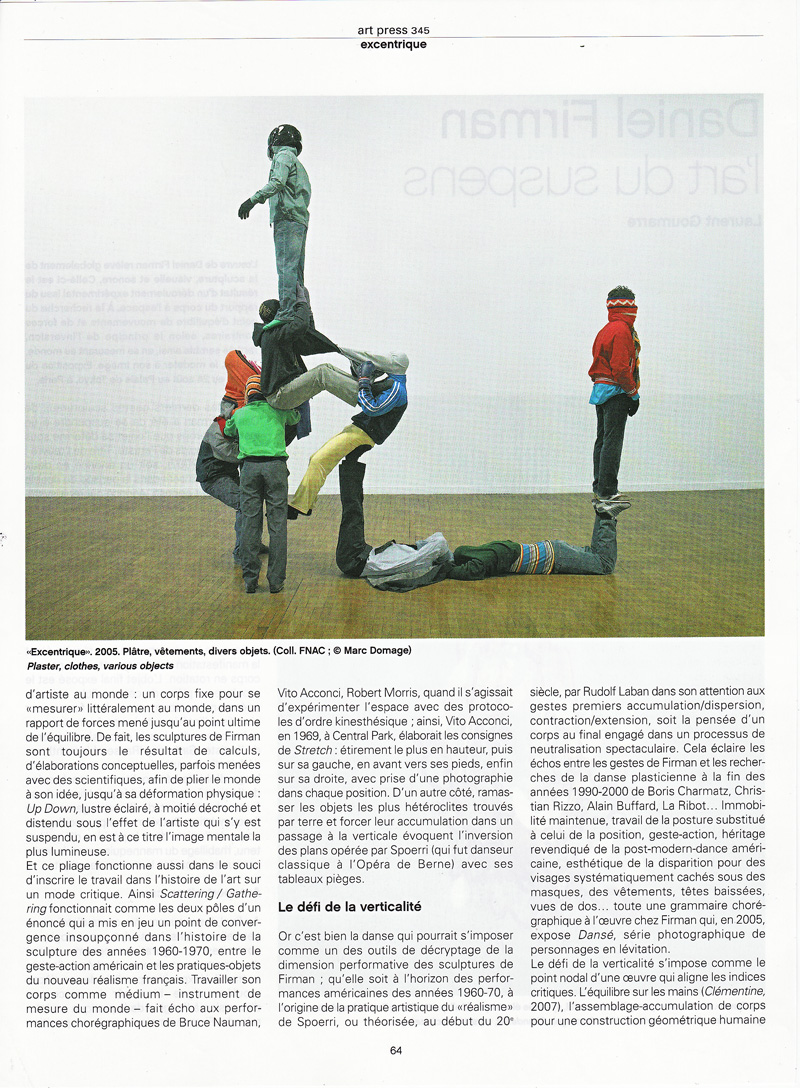 DANIEL FIRMAN
THE ART OF DANGLING

Daniel Firman’s work is globally a question of sculpture, visual and audio. It is the result of an experimental continuity stemming from the relationship of the body with space. Looking for the point of balance of movements and opposite forces, based on the principle of reversal, the artist seems – when measuring himself with the world – to fold it and mould it in his image. Exhibition from the 12th of June to the 24th of August at the Palais de Tokyo, in Paris.

One of Daniel Firman’s most recent sculptural gestures was to dangle himself from a chandelier, so that the object bent with the weight of the artist. Title of the artwork: Up Down (2007), that is to say a two-part statement that inscribes itself in the thought process of an opposite double movement, a statement that has systematically controlled an identified body of work since the end of the 1990s. One can first go back to his exhibition Scattering / Gathering in 2000 (Château de La Napoule) to measure the challenges of a practice that developed based on the balancing point between opposite forces. Scattering defined the Movement Protocol (1998): feet firmly on the ground, arms raised, the artist built earth walls that he closed above him; the resulting shape was the manifestation of the limits of his rotating body. The final exhibited object is the plaster cast of this cell, that is to say an operation of form reversal to visualise the inside of the “performance”, that implies from then on the scattering of the artist’s body.
Gathering used another reversal technique, assembling heterogeneous objects on the artist’s shoulders until the double limitation point of his physical strength and the guaranteed inertia of accumulation. Second stage: moulding the artist’s body in the balancing position, dressing the model before replacing on his shoulders the mass of objects.

In the end, the contradictory movements neutralise themselves in abstract or figurative analogical sculptures, like implicit, hidden self-portraits of the artist at work. The parallel exhibition of these moulded pieces signs the reversal process that is of course at the origin of Firman’s sculptural practice, but also his position as an artist in the world: a fixed body to literally “measure” oneself with the world, in a ratio of strengths taken to the ultimate point of equilibrium. In this way, Firman’s sculptures are always the result of calculations, conceptual developments, sometimes carried out with scientists, in order to bend the world to his idea, until its physical deformation: Up Down, a lit chandelier, half hanging and distended under the effect of the artist who dangled from it, is in this respect the most luminous mental image.
And this bending also works in the idea of inscribing the work in history of art in a critical manner. In this way, Scattering / Gathering functioned as two parts of a statement that brought to light an unsuspecting point of convergence in the history of sculpture of the 1960s and 1970s, between American gesture-action and the object-practice of French New Realism. Using one’s body as a medium – as an instrument of measure of the world – echoes the choreographic performances by Bruce Nauman, Vito Acconci, Robert Morris, when the idea was to experiment in space with kinaesthetic protocols; in this way, Vito Acconci in 1969 in Central Park developed the guidelines for Stretch: stretching as high as possible, then to the left, falling forward towards one’s feet, then to the right, with a photograph taken in each position.  On another side, picking up the most varied objects found on the ground and forcing their accumulation into a vertical passage referring to the reversal of plans operated by Spoerri (who was a ballet dancer at the Opera of Bern) with his snare-pictures (tableaux pièges).

The challenge of verticality

Nevertheless, it is dance that could impose itself as one of the tools to decrypt the performative dimension of Firman’s sculptures; whether they be on the horizon of the American performances from the 1960s and 1970s, at the origin of the artistic practice of Spoerri’s “realism”, or theorised at the beginning of the 20th century by Rudolf Laban in his attention to the primary gestures of gathering/scattering, contraction/extension, that are the reflection of a body that is committed in the end to a process of spectacular neutralisation. It enlightens the echoes between Firman’s gestures and the research of visual dance at the end of the 1990s and 2000s with Boris Charmatz, Cristian Rizzo, Alain Buffard, La Ribot, etc. A maintained immobility, work on posture substituted to position, gesture-action, a lineage claimed by American post-modern-dance, an aesthetic of disappearance for faces that are systematically hidden behind masks, clothes, hanging heads, views from behind… a choreographic grammar in play in Firman’s work who exhibited Dansé in 2005, a photographic series of characters in levitation.
The challenge of verticality imposes itself as the nodal point of an artwork that displays critical clues. Balancing on hands (Clémentine, 2007), the assemblage-accumulation of the body for a human geometrical construction (Excentrique, 2005) pursue the Gathering effect; whereas the crushing of a freezer under the weight of a safe (Chute libre, 2007) reverses a moment/key gesture in the history of 20th century sculpture: when Bertrand Lavier placed a fridge on a safe, he neutralised the pedestal and its exhibition object, redefining an artwork as an object that could from then on take into account its own exhibition conditions. The reversal of the safe on the freezer by Firman – literally dictated by a slip of the tongue by Lavier in a radio interview – produces a catastrophic image subject to the laws of terrestrial attraction, but once again the catastrophe is controlled, the folds of the crushing have been scientifically calculated to obtain a “new” New Realism, that reregisters Lavier’s sculptures in the 1960s perspective of César and Arman.  At the Palais de Tokyo, verticality will once again become hysterical, correcting the laws of gravity with the presentation of a spectacular piece: Würsa (à 18 000 kilomètres de la Terre). The installation of a taxidermy elephant balancing on its trunk, that is to say the creation of a gesture-image that is impossible in our world. But “the world is not enough”; calculations carried out by the artist with a scientist of the Collège de France testify to this: this gesture exists 18 000 kilometres from Earth, in a space that is no longer ours, and an elephant is proof. Firman’s sculpture or the art of dangling.