Grey Matter, Daniel Firman’s first major personal exhibition in a museum, reveals all the facets of his work. He has entirely redesigned the exhibition areas to present already « historical » works in association with some previously unseen creations in a highly original scenographic context. His interest in everything which constitutes sculpture today is composed « in the manner of a music score ». From iconographic and choreographic references to questions closely linked to tradition and sculpture (molding, the body, realism), from sound to space and gesture to image, Daniel Firman has created a veritable polyphony which he presents here for the first time.

With this exhibition, Daniel Firman evokes the multiple meanings of the expression « Grey Matter ». From neuronal matter to earth as a raw material aw well as composite Industrial materials, interpreting his work becomes immediately reversible and simultaneous. Without ignoring the use of the color grey in contemporary art, this neutral and substantial reference begs the question: can the same thing be understood in two different ways?

Daniel Firman is a visual artist who constructs « presence ». For him, shapes as fragments (of the body, time, an object or a word)  are essential. They must be efficient whilst simultaneously coping with a principle of image. Although the appearance of his work echoes back to the traditional questions of a classical sculptor (weight, shape, matter, the body, gravity and modalities of creation) it can also be seen as being completely modern in the way it considers a working area to be space which is linked to life, performance and effort in order to exist within gesture and avoid considering sculpture to be the result of a sculptor’s program.

“I demand much effort of my models in order that they remain immobile until they are exhausted, and it is with this approach to time that I create sculpture”.

Over the two levels of mac LYON which house the exhibition, the visitor walks along an itinerary that oscillates between visible and invisible objects and human forms, between presence and absence, following a kind of ‘story in sculpture’ which progressively introduces perceptual areas. 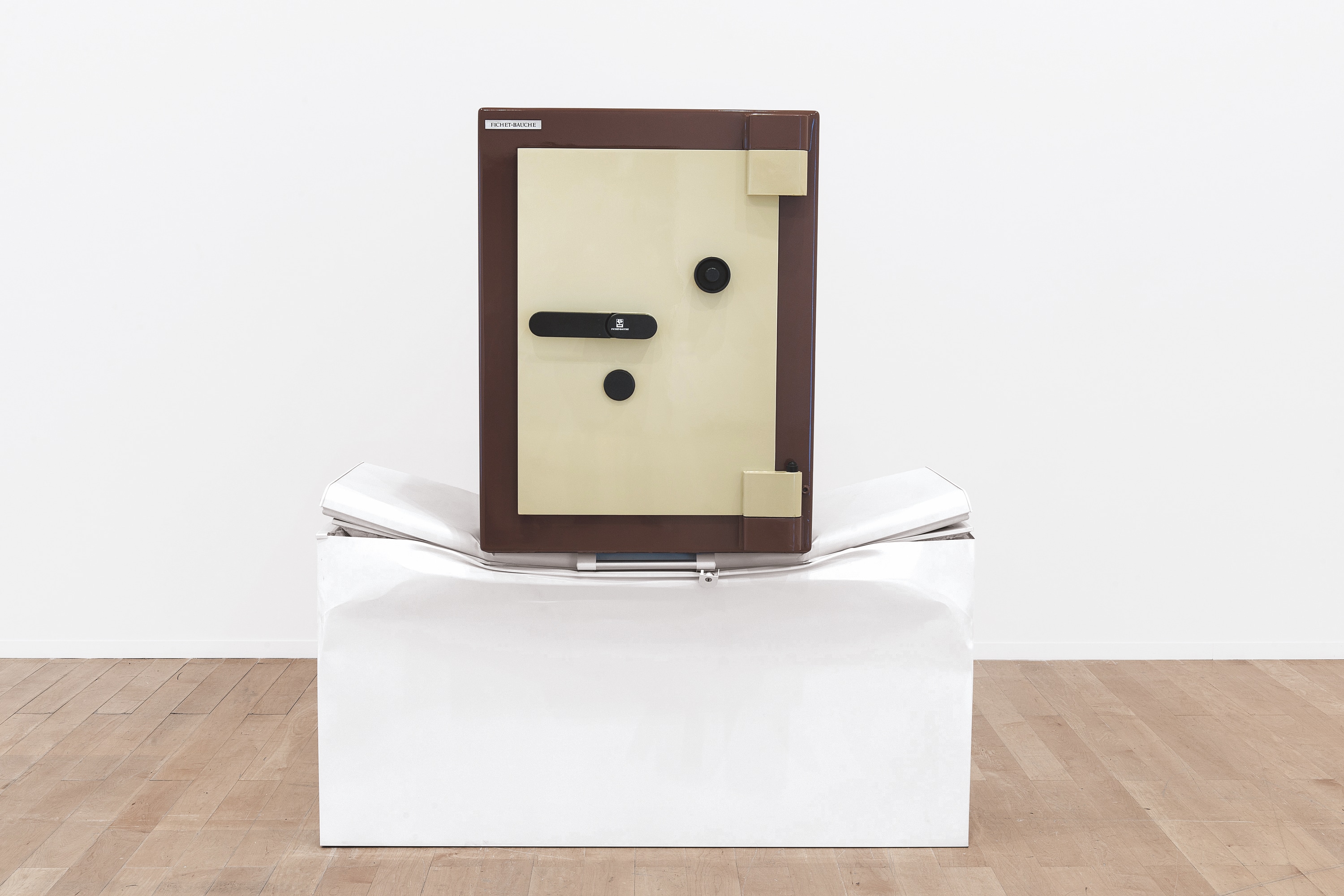 The question of reversibility is omnipresent in this exhibition from the very first room, which is dedicated to Sculptures/Objects that function in the manner of a series of collisions that question the meaning of « reversal »: from Firman’s story for Chute libre (Free Fall) to Rotomatic, which drives the modern rotary mechanism which has been turned inside out like a glove.

In the ensemble of works of Je tourne autour de la terre (I turn around the earth) Daniel Firman assumes a physical presence in the midst of the upheaval by creating the inverted mechanism of a potter’s wheel in which the artist spins around at 33rpm like an astronaut rotating around a mass of incontrollable earth. This piece presents Firman’s protocols and chaotic production methods, where the finished piece takes on the form of residue from actions.

Daniel Firman composed his exhibition as an itinerary, akin to a music score with rhythm, accelerations and silences. In 1998, the artist began to create performances in his workshop in which he gradually enclosed himself within a mass of clay which limited his working and living space. This series was called Kinésphère, in reference to Rudolf Von Laban and body movement. From these formworks in earth a plaster cast was produced in the form of a shell that ossified his movement. The body disappears, leaving a volume in which no bodily representation is present, even during the creative period. This series has been reactivated for the exhibition and given the name of Solo. 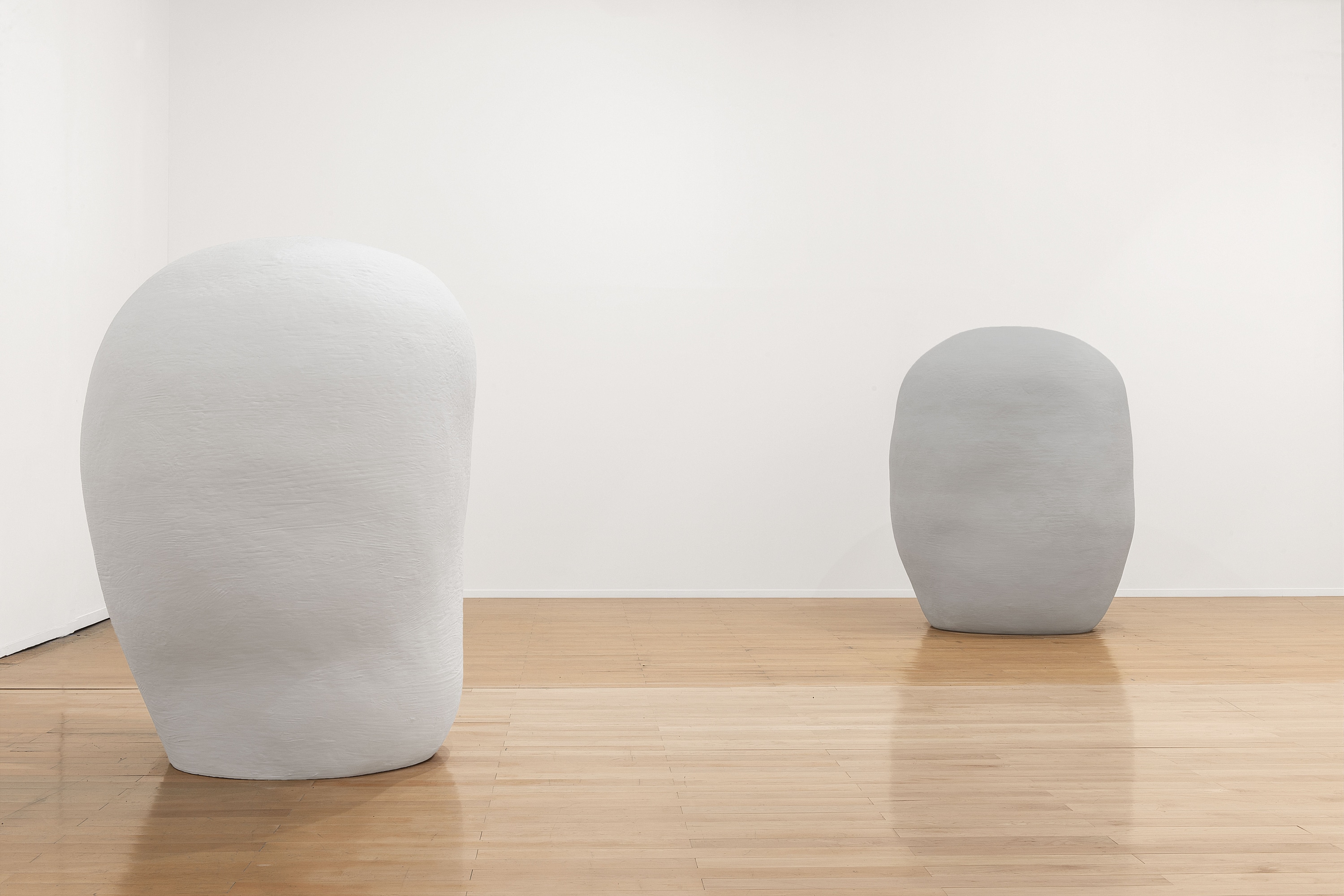 To add to the complexity of the series Firman asked Annie Vigier and Franck Apertet (les gens d’Uterpan) for a creation which filters its way into the exhibition like a question mark, and offers the possibility of revealing an articulation of life within his work.

« The question of life is essential to me in this exhibition in order to be able to enlarge the perception of my work. After defining my synopsis I asked Annie Vigier and Franck Apertet to react to a specific area in my project. I met Annie Vigier and Franck Apertet during the 2007 Lyon biennial and X-event 2, and since then we have remained in contact and exchanged ideas. They are as close as it is possible to be to what I feel about performance and dance today. »

The result was named Géographie Lyon. It is a performance which will span the entire length of the exhibition, with the alternating presence or absence of the performers. This choreography delimits an operational field of dance which, once closed off, becomes a statue. Whilst walking around, visitors can hear the dancers and sense their movements but they cannot see them. This is the principle of proximity of Kinésphères.

« With les gens d’Uterpan it was clear that the presence of life could not be placed near the body/sculpture. The perception of what they emanate is very different. Understanding them necessitates dissociation. »

As a counterpoint to Géographie Lyon, the sculpture Duo consists of molding of the bodies of dancers who pose one after the other without knowing what pose was adopted by the dancer who preceded them. This was done using the principle of contact improvisation, a dancer form which was tested in the United States by Steve Paxton in 1972. The seven dancers all perform a duo by grafting themselves onto the residual traces of the preceding performer. Duo takes the shape of an exquisite cadaver that, conversely to Géographie Lyon, simply presents the sedimentation of a gesture that is fixed by a drawn-out sequence in time which is nevertheless brought together simultaneously and in a permanent way. 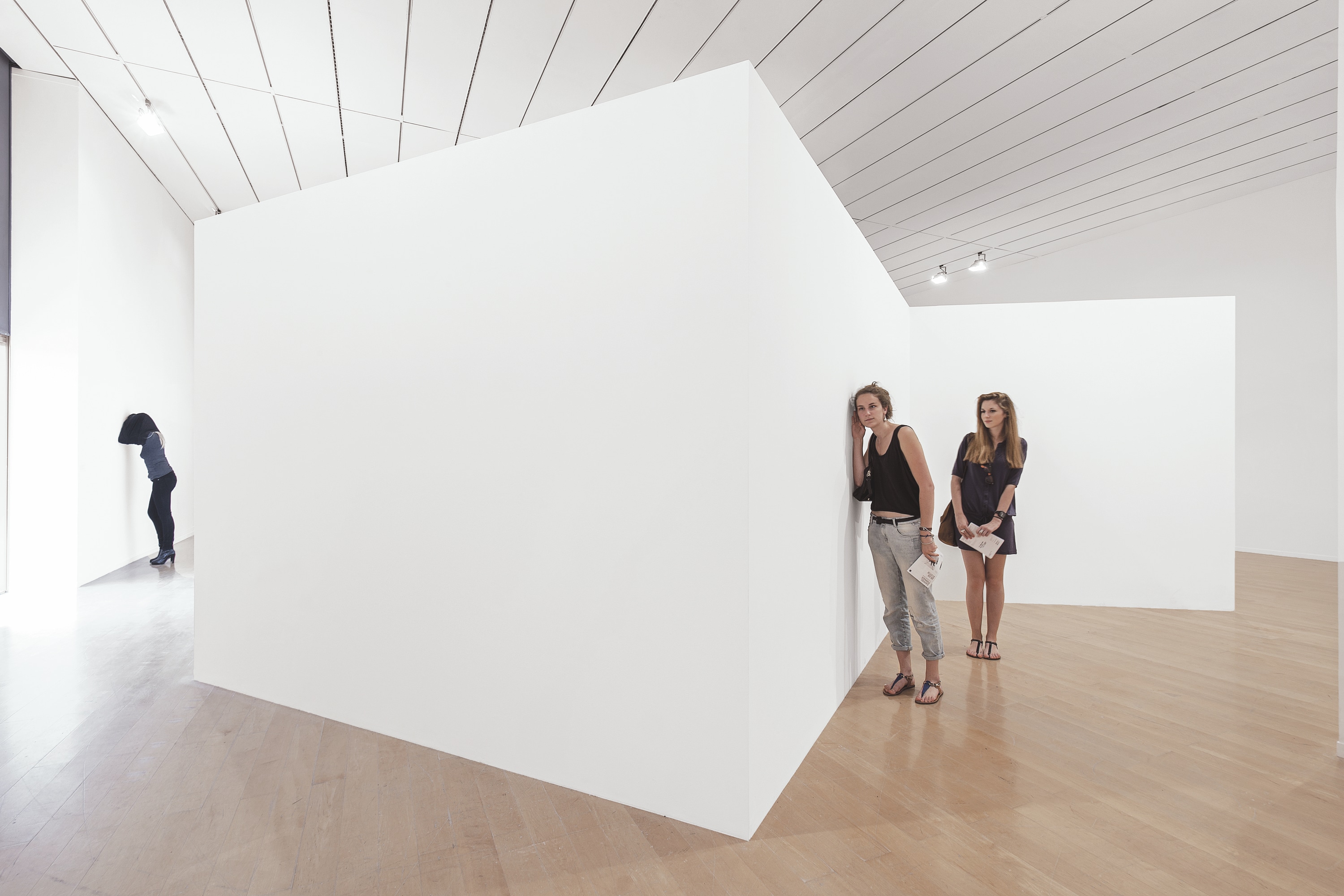 In this continuity/contact, Nasutamanus the elephant is held in a state of suspension which perturbs our perception of physical space. The title evokes its quality of prehension with its hand-trunk ensemble which allows it to distance itself from us in its most intelligible understanding. 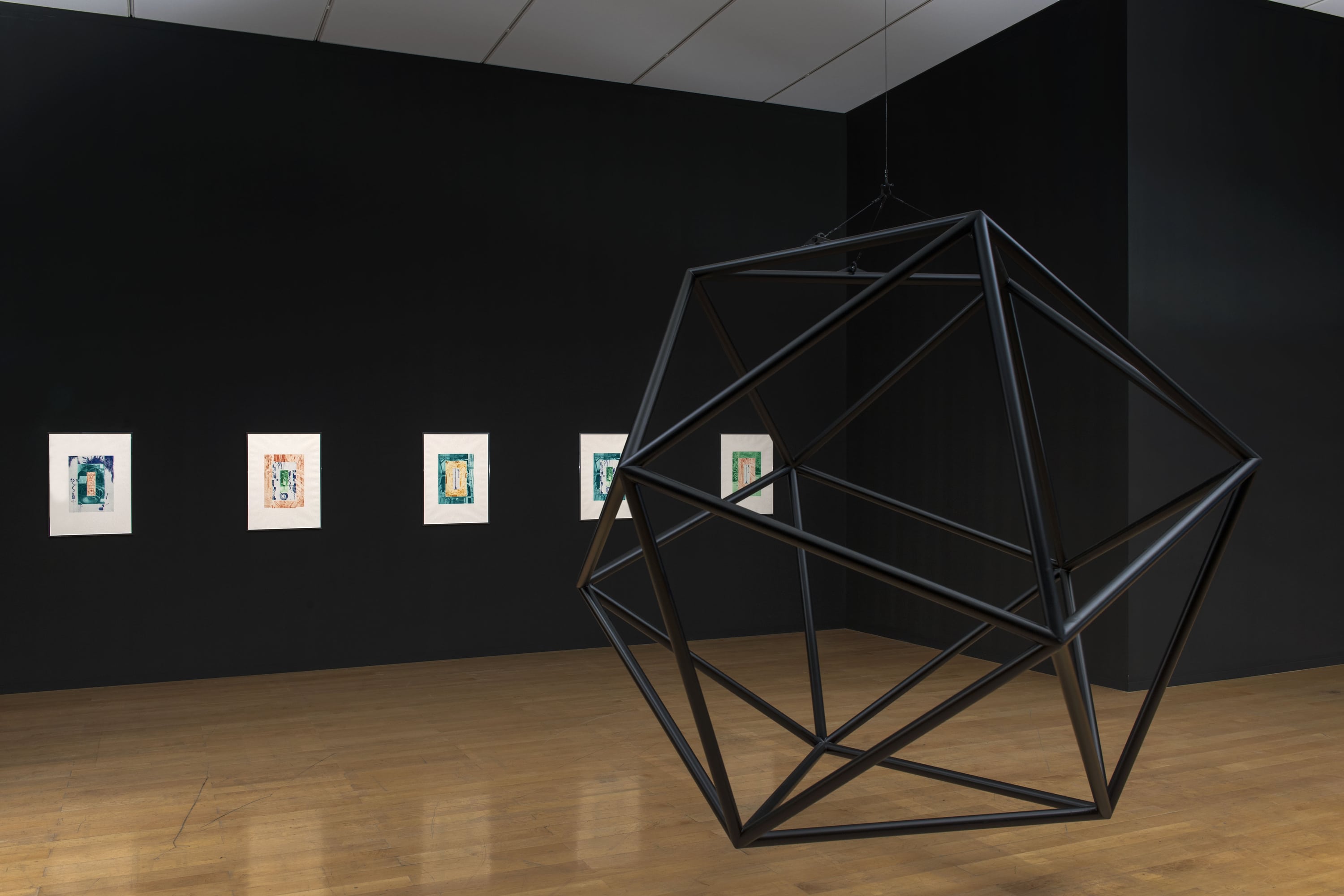 On Level 3, the exhibition area is structured around a sound system which is installed as an environment, with several forms holding a dialogue with Firman’s references.

A Black Icosahedron (a regular polyhedron whose surface is composed of 20 equilateral triangles) floating in space in an area that has been painted black is a form which was used by Laban, as is Kinésphère. Reproduced as plane geometry, it becomes Cube, a work composed of neon lighting. Cartels, co-created with Belgian artist David Evrard, is an ensemble of engravings that function as an echo to the other works on the basis of the interests common to both artists, from Labanotation to cut-up. These Cartels rework images of ‘reference’ that have been mixed together and assembled as a collection of poetic variations that are subjective commentaries of the exhibition.

Finally, a record deck revolves silently, as a repetitive uninterrupted and brutal sound emanates from the Drone Project sound system.

The sound pieces I have created have rarely been exhibited. In this series of works, it was important for me that this relation which I have had for years with acoustic and serial music be represented in the form of the installation called Drone Project.

Created with reference to ‘drone music’ and musical styles that are characterized by their repetitive nature, the installation is deployed on three walls, where three electric guitars turn clockwise on the axis of their necks at 78rpm to a record of the « noisy » musical style.

The term « drone music » was first used in 1958 to describe ethnic or spiritual musical styles which contain a drone-like element and whose rhythm does not change, or if it does, it does so very subtly. The contemporary version of drone music is often used by artists linked to the post-rock and experimental movements such as La Monte Young, Charlemagne Palestine and Eliane Radigue.

This piece is the suite of a work called Digital SounD, which was created in 2001. A record deck was combined with a potter’s wheel along the common theme of their drive systems. These elements are presented separately in this exhibition. As far as I’m concerned, the circle has been closed around the ensemble, with, perhaps, this question: can different things be understood in just one way? And vice versa. 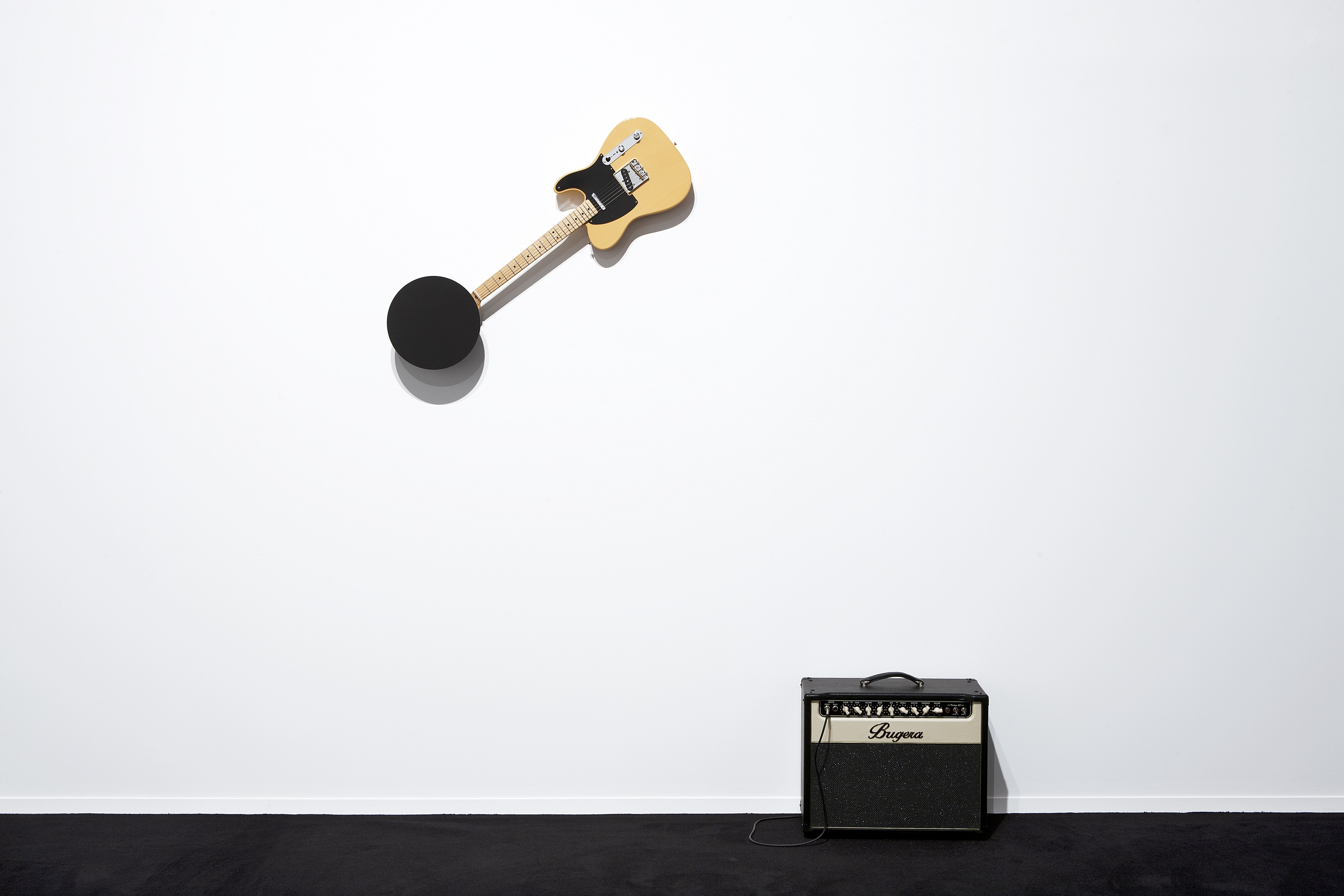