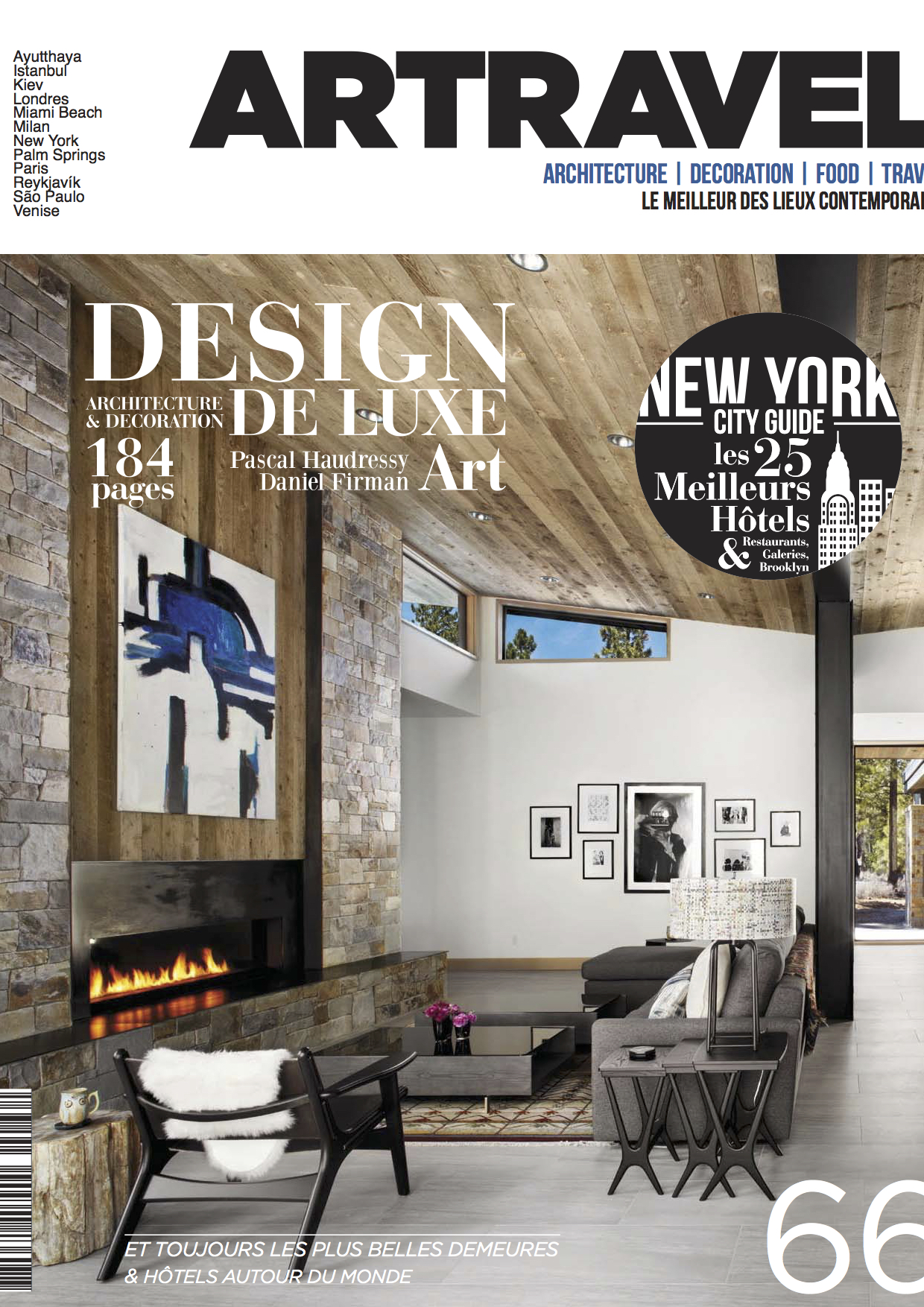 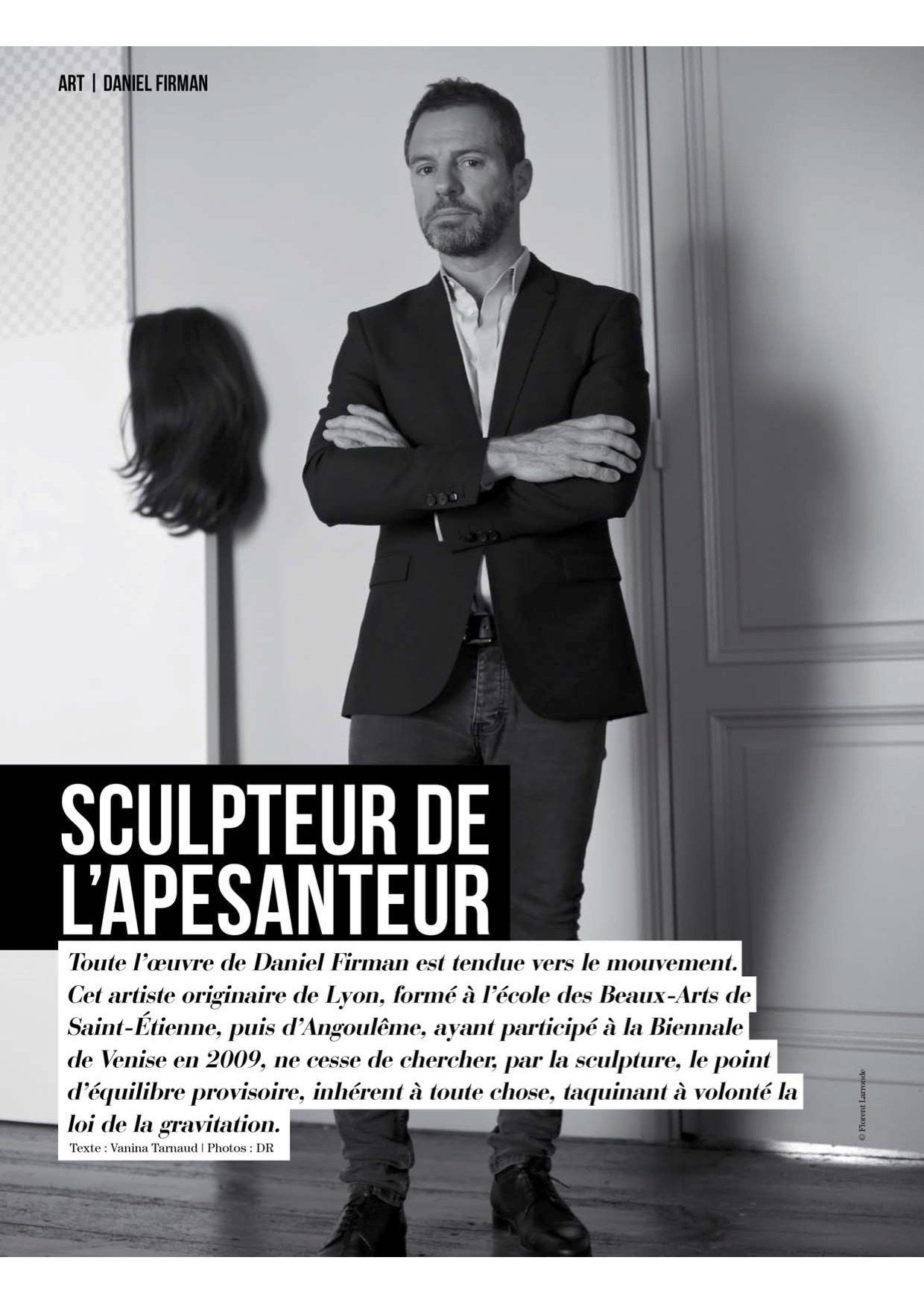 All of Daniel Firman’s work seeks movement. Native of Lyon, this artist, trained at the Fine Arts School of Saint-Etienne, then Angouleme, who participated in the 2009 Venice Biennial, is constantly searching, through the means of sculpture, the point of temporary balance, inherent to each and every thing, willingly teasing the laws of gravitation.

Chance doesn’t exist. Coming from a family of builders, Daniel admits to having always been sensitive to construction and fabrication methods. Intuitively, in Saint-Etienne, he started leaning towards sculpture.

“For me, matter is a vast field of spaces and textures, perceptible or not. Beyond concrete surface, I take into consideration the shifting and the elasticity of this matter. Without being able to prove it; I think that things have the ability to turn upon themselves. This is what I experience in my work as a visual artist.”

The artist is humble. Nevertheless, to create Tourner autour de la Terre, entre terre et bakélite, Firman built a potter’s wheel with an inverted rotation. When sitting on a motorised chair that is fixed to the axis of the tool that can turn at up to 33 rotations per minute, the moving sculptor imprints in the immobile block of earth the generated instability. The artworks, aluminium casts created from modelled blocks of earth, are installed on cylindrical columns, exhibited in a round space. One spontaneously moves around them to be able to better understand them.

Daniel has therefore succeeded: everything has been brought together, the tool, the matter, the sculptor, the space and the spectator, in the same movement.

“My sculptures are not freeze-frames, but rather pauses in a moment of suspension linked to movement. If there are some obligatory moments of unbalance, I choose this brief space where the body could hold still.” His Backflip series, casts of polyurethane resin of clothed bodies about to fall, perfectly embodies the materialisation of this idea.

The notion of falling, linked to weight, continues with Würsa, a monumental piece exhibited at the Château de Fontainebleau. A life-sized elephant (scale one being a common thread in Firman’s work) taunts Newton, balancing on the tip of its trunk. In this way, the heaviest earth mammal elegantly escapes any form of gravity. The installation of the aerial pachyderm brought the artist back to trivial gravity.

“In order to enable it to enter this room, we had to come through the window after having moved a Sèvres vase weighing a ton and that hadn’t been moved for a century.”

But what would physics be without its psychological counterpart? Our sculptor penetrates this zone, faithful to his own specific protocol, resin casts of human bodies and objects. The monochrome brings them together. While Grey Matter borrows its technique from the Combines dear to Rauschenberg and Nevelson, its discourse is another thing. Bodies supporting heads filled with various objects, skilfully questioning their propensity to stay upright. Will the head win over the body? The psyche’s volume becomes palpable here, without needing words, and with it comes the probability of unbalance.

All this would not be able to be created without pin-point accuracy. However:

“With Duo, I put myself in a choreographer’s shoes, whilst obeying sculpture’s constraints. It’s a sequence of casts of six duos of dancers, assembled according to the principle of the exquisite corpse. Each dancer took a pose depending on the one of his/her predecessor, but not knowing the one of his/her successor. The sculpture is built in this manner, without controlling the entire set.”

A relentless worker, Daniel Firman builds, filled with a singular idea of utopia:

“It would be an artwork produced without effort. I like things that appear with closed eyes. My vision of sculpture is created in a blind world.”

With his spirit and eyes looking in this direction, the sculptor starts working again, displaying a lightness devoid of frivolity. 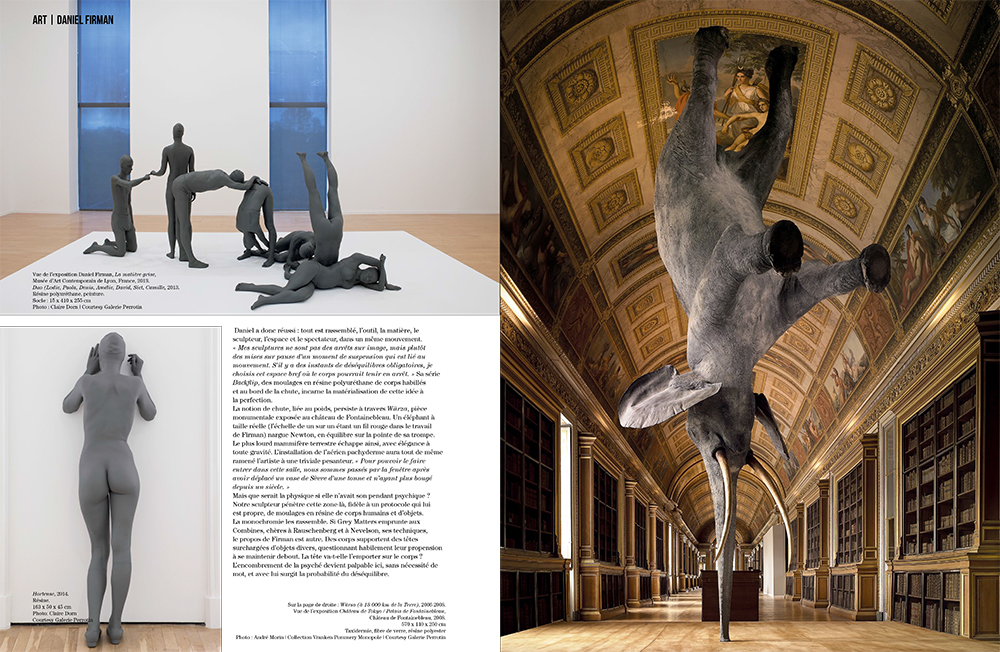 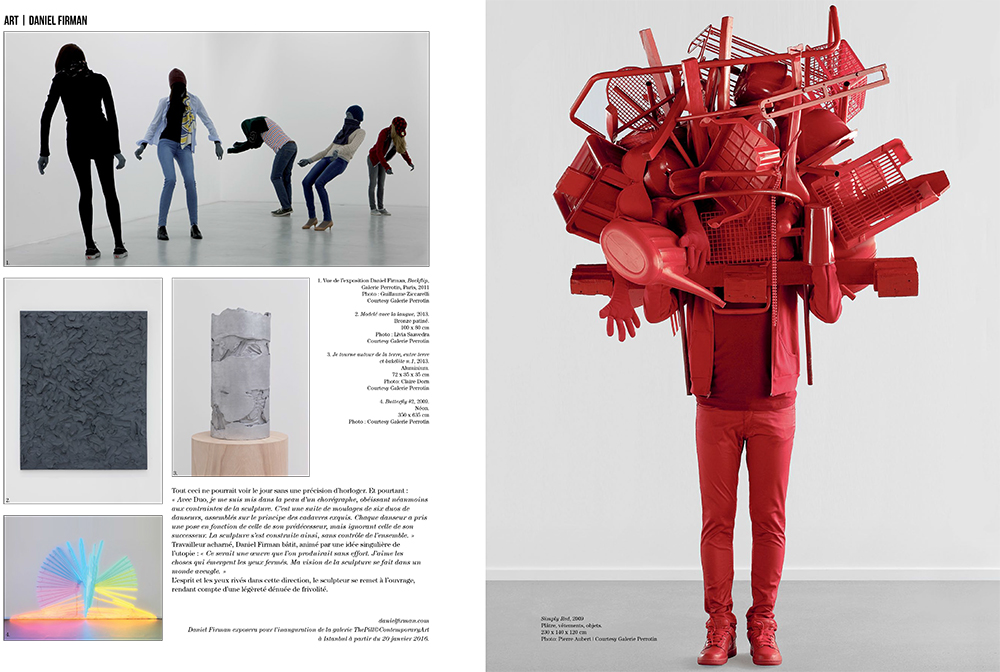