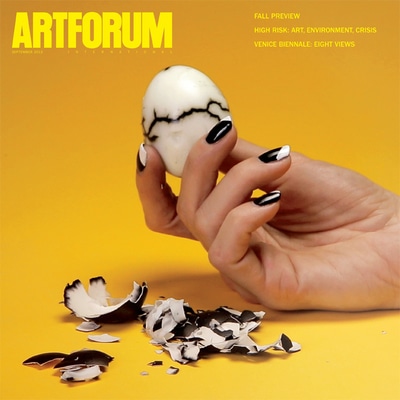 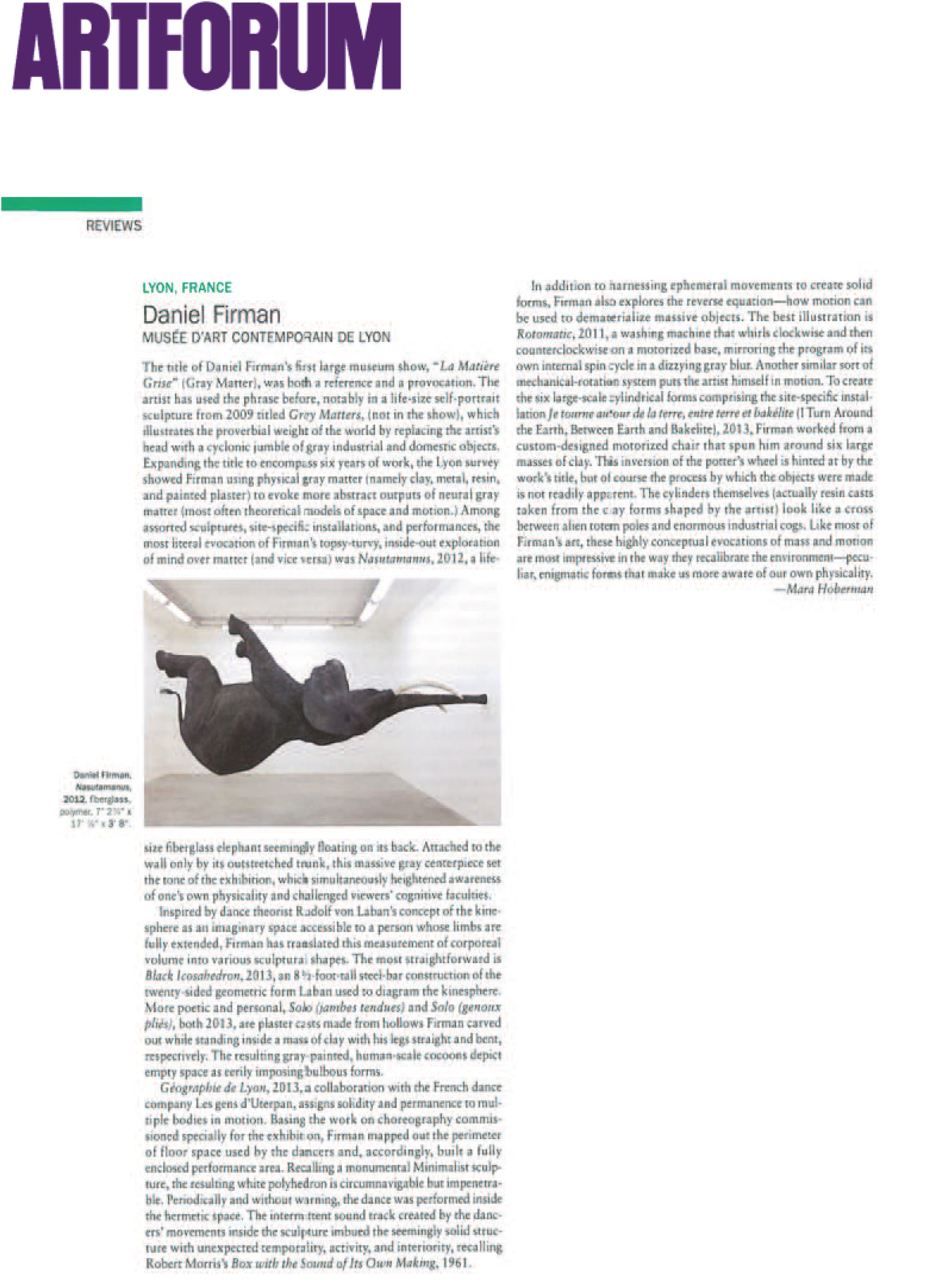 The title of Daniel Firman’s first large museum show, La Matiere Grise (Gray Matter), was both a reference and a provocation. The artist has used the phrase before, notably in a life-size self-portrait sculpture from 2009, a piece of art titled Grey Matters (not in the show), which illustrates the proverbial weight of the world by replacing the artist’s head with a cyclonic jumble of gray industrial and domestic objects. Expanding the title to encompass six years of work, the Lyon survey showed Firman using physical gray matter (namely clay, metal, resin, and painted plaster) to evoke more abstract outputs of neural gray matter (most often theoretical models of space and motion).

Among assorted sculptures, site-specific installations, and performances, the most literal evocation of Firman’s topsy-turvy, inside-out exploration of mind over matter (and vice versa) was Nasutamanus, 2012, a life-size fiberglass elephant seemingly floating on its back. Attached to the wall only by its outstretched trunk, this massive gray centerpiece set the tone of the exhibition, which simultaneously heightened awareness of one’s own physicality and challenged viewers’ cognitive faculties.

Inspired by dance theorist Rudolf von Laban’s concept of the kinesphere as an imaginary space accessible to a person whose limbs are fully extended, Firman has translated this measurement of corporeal volume into various sculptural shapes. The most straightforward is Black Icosahedron, 2013, an 8-foot-tall steel-bar construction of the twenty-sided geometric form Laban used to diagram the kinesphere. More poetic and personal, Solo (jambes tendues) and Solo (genoux plies), both 2013, are plaster casts made from hollows Firman carved out while standing inside a mass of clay with his legs straight and bent, respectively. The resulting gray-painted, human-scale cocoons depict empty space as eerily imposing bulbous forms.

Géographie de Lyon, 2013, a collaboration with the French dance company Les gens d’Uterpan, assigns solidity and permanence to multiple bodies in motion. Basing the work on choreography commissioned specially for the exhibition, Firman mapped out the perimeter of floor space used by the dancers and, accordingly, built a fully enclosed performance area. Recalling a monumental Minimalist sculpture, the resulting white polyhedron is circumnavigable but impenetrable. Periodically and without warning, the dance was performed inside the hermetic space. The intermittent sound track created by the dancers’ movements inside the sculpture imbued the seemingly solid structure with unexpected temporality, activity, and interiority, recalling Robert Morris’s Box with the Sound of Its Own Making, 1961.

In addition to harnessing ephemeral movements to create solid forms, Firman also explores the reverse equation-how motion can be used to dematerialize massive objects. The best illustration is Rotomatic, 2011, a washing machine that whirls clockwise and then counterclockwise on a motorized base, mirroring the program of its own internal spin cycle in a dizzying gray blur. Another similar sort of mechanical-rotation system puts the artist himself in motion. To create the six large-scale cylindrical forms comprising the site-specific installation Je tourne autour de la terre, entre terre et bakelite (I Turn Around the Earth, Between Earth and Bakelite), 2013, Firman worked from a custom-designed motorized chair that spun him around six large masses of clay. This inversion of the potter’s wheel is hinted at by the work’s title, but of course the process by which the objects were made is not readily apparent. The cylinders themselves (actually resin casts taken from the clay forms shaped by the artist) look like a cross between alien totem poles and enormous industrial cogs. Like most of Firman’s art, these highly conceptual evocations of mass and motion are most impressive in the way they recalibrate the environment-peculiar, enigmatic forms that make us more aware of our own physicality.